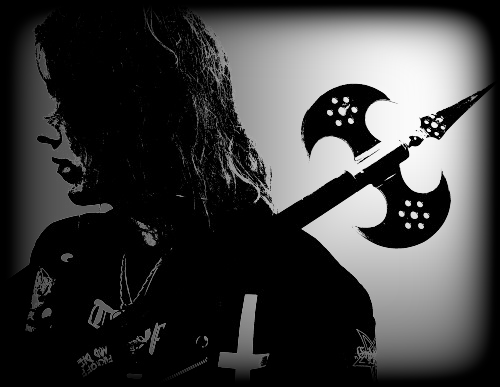 History: The motivation to write own music was born for a simple reason: Other artists music, would in most cases, not fulfil the personal expectations, in case of lyrics, sound and songwriting. Mainly pioneering Extreme Metal bands like Bathory, Morbid (Swe), Mayhem, Sodom, Kreator, would be an inspiration and heavy influence, as well as later upcoming bands, like Marduk and Endstille.

The decision for Black Metal was made, because no other extreme music genre would fit the extreme aggression and emotions within an evil mind more precise. Black Metal means to declare war on the common human society, to spill corrosive misanthropy, provoking blasphemy, and to release heavy artillery fire against all greater religions.

In 2011, while picking an E-Guitar for the first time, the ignition and black magic began. 2012 initiated the recording of a first rehearsal. "Hellgoat" was chosen as an early band name, but was soon thereafter changed to "Albtraum".

15th July 2014, marking the release of the first official Demo "Misanthropic Antichrist". Everything was created and produced by Chival himself: Songwriting, instruments, recording, mixing, mastering, production and release of the Demo copies. That also came along with the creation of an own independent label, named "Goatlord Records". It shall be responsible for the release and spreading of future Albtraum productions.