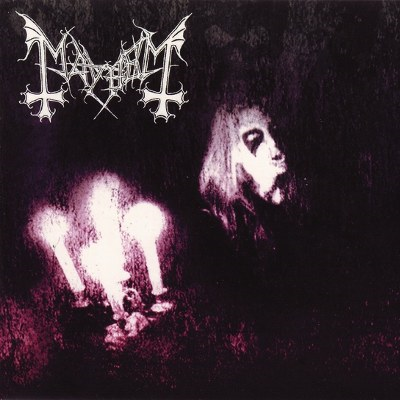 A unique piece of music history


This record is truly a important piece of music history. It features the best lineup Mayhem ever had: Dead, Euronymus, Necrobutcher, Hellhammer Every instrument offers a perfect sound setup, resulting in an ugly and evil wall of sound. Hellhammer's drums strike with great precision and he offers some absolutely unique drumming. Necrobutcher plays his bass very solid and offers in Songs like "Freezing Moon" a great, clearly notable, thick bass line. Euronymus delivers atmospheric, unholy guitar riffs along with chaotic solos. The vocals, which Dead delivers, are truly aggressive, haunting, painful and sacrificing.

The intro is just perfect, with Dead shouting into the microphone: "... death is real!" It comes out of nothing and is a perfect statement for Black Metal music: People have to fucking fear it! It Opens with two songs from the "Deathcrush" demo, creating some brutal and raw atmosphere of blood and gore. From the next song on, it changes to a mystical and dark atmosphere. "Funeral Fog", this is the true highlight of the whole live performance. It draws you in, from the beginning. The long instrumental intro itself is a revelation, but it gets truly perfect with Dead's sacrificing vocals. Within the song he releases a scream, so intense and mighty, it seem to freeze all time, it spreads into eternity and the endless void. At this point it should be absolutely clear, how dedicated Dead was to his art and music.

"Funeral Fog, The Freezing Moon, Buried by Time and Dust, Pagan Fears", all new songs at this point of the time line, with unique lyrics written by Dead. Here the band lineup shows it full potential. This are truly the best songs on this record and the best in Mayhem's career. But even the moderate songs like "Pure Fucking Armageddon" got hugely improved, while comparing them to the 87 Demo tracks. And so it all ends with Dead screaming:
"PURE FUCKING ARMAGEDDON!"

Final conclusion: One of the best Black Metal vocals of all times are offered in the "Live in Leipzig" record. An insane performance in all directions, not to forget the heavy atmospheric effects, like impaled pig heads and rotten meat, given to the audience. Mayhem was probably one of the first extreme metal band to use such stuff in a live gig. Recommended to everyone who is interested into history of extreme music creations.
"Live in Leipsick" is one important artefact.


Update Required To play the media you will need to either update your browser to a recent version or update your Flash plugin.